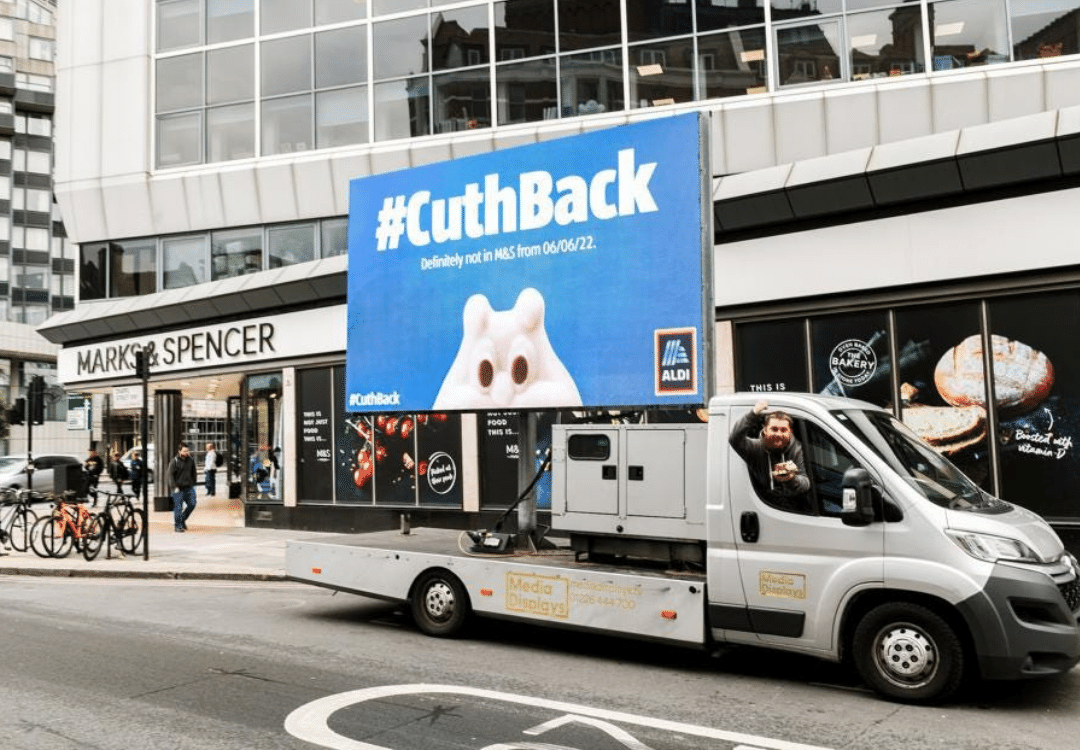 #Cuthback: Our favourite convict caterpillar is BACK and you wouldn’t believe his latest stunt!

By Caroline LatusJune 20, 2022No Comments

Home » #Cuthback: Our favourite convict caterpillar is BACK and you wouldn’t believe his latest stunt!

If we had to pick a brand story that we’ve been obsessed with in recent years – it has to be Aldi vs M&S: Caterpillar Cake Gate. The way Aldi has handled the explosion of negative coverage about one of their top-selling imitation products had us amazed and quite honestly, reflects the Aldi brand brilliantly. It’s been 14 months since Marks & Spencer tried to sue Aldi for producing a cake that looked *too much* like their famous Colin – and we’re still talking about the legal case and PR battle that followed.

Do you know why? Because it isn’t over yet…

Now in true cheeky Aldi style, their latest campaign saw them parking an ad truck directly outside one of M&S’ busiest and most centralised stores on Edgware Road, London. The truck brandished the words `#Cuthback`.

Considering Aldi fought their side of the legal battle by starting a social media campaign called #FreeCuthbert, we’re not overly surprised at this cringeworthy but respectable stunt. In Aldi’s words, “Where else would we announce it? #Cuthback”.

So how is Aldi doing?

Cuthbert returned to Aldi’s shelves nationwide on the 6th of June  – so the result was idyllic. Not only has the German supermarket been able to keep its version of Colin in circulation, but according to Statista, Aldi’s sales increased 1.1% from November 2021-January 2022 – 7 months after M&S’ potential suing crawled into the public eye.

Aldi has retained its brand identity as our chosen affordable, down-to-earth, working-class supermarket, still known for its risky brand rip-offs. And we get to buy the equally delicious Cuthbert at £4.99 – £2.01 cheaper than Colin.

It’s also worth mentioning Aldi’s notorious capability to sell merchandise of their in-store characters: first Kevin the Carrot, and now Cuthbert has made his way into the eBay listings. Have you ever heard of a supermarket selling merch? Because we haven’t.

How is M&S doing?

M&S have responded to the ordeal in true M&S style: they’re selling the sh*t out of Colin and capitalising on his negative exposure. You can now buy a personalised Colin the Caterpillar cake (serves 40) for a mere £45, a Colin-themed Cake Jar, and even a Superhero Colin cake.

Fair play to both supermarkets: brand reps intact, sales high. What more could they ask for?